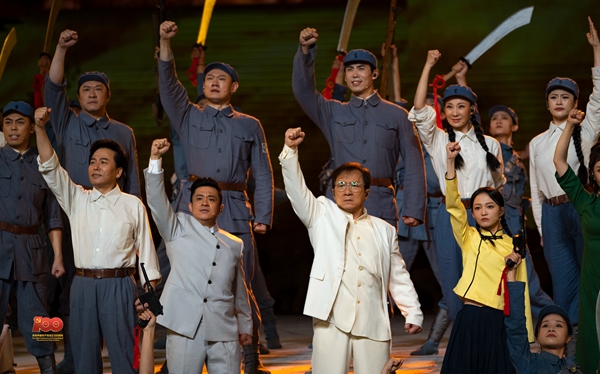 Tenor Liu Naiqi celebrated turning 40 by proudly representing Macao with a performance at the grand gala commemorating the centenary of the Communist Party of China, Chen Nan reports.

On June 23, Chinese tenor Liu Naiqi turned 40.Unlike previous years, when Liu celebrated with his family and friends, this year, the tenor was busy rehearsing for the grandest of galas-the one to celebrate the centenary of the founding of the Communist Party of China.

The tenor, who lives and works in Macao, flew to Beijing shortly after receiving the invitation to perform. For the whole of June, he stayed in the capital and rehearsed.

"It's an unforgettable month and birthday. I am honored and glad to perform in the gala as a representative of Macao. The celebration of the CPC's 100th birthday is a huge event for all of the Chinese people," says the tenor.

The gala was staged at Beijing's iconic National Stadium, also known as the Bird's Nest, on the evening of June 28. President Xi Jinping, also general secretary of the CPC Central Committee, joined around 20,000 audience members to watch the two-hour performance.

Titled The Great Journey, the four-part epic traced the Party's century-long history, from its revolutionary victories and the construction spree in the early days of the People's Republic of China to the unprecedented changes brought about by the policy of reform and opening-up in recent decades. Fireworks lit up the sky as the celebration reached its crescendo.

According to Shen Chen, deputy chief director of the gala, nearly 8,000 performers and numerous choruses comprising around 8,000 students from over 20 universities took part.

Alongside singers and actors, including Hong Kong movie star Jackie Chan and Taiwan pop idol Angela Chang, with the accompaniment of a chorus, Liu performed the song, Defending the Yellow River, which was adapted from the seventh chapter of the famous music piece, Yellow River Cantata.

In 1939, musician Xian Xinghai and poet Guang Weiran wrote Yellow River Cantata in Yan'an, Shaanxi province, which was one of the most important revolutionary bases. At that time, the country was ravaged by invaders and the song, with its encouraging movement, gave Chinese people confidence that victory would come.

"The song, Defending the Yellow River, is a very well-known piece and is performed by choirs, both professional and amateur. It's a very powerful song, expressing the determination of the Chinese people to defend peace," says Liu.

"I was lucky to receive training by Yan, who shared his understanding about the song. Whenever I perform it, I feel close to the many unnamed martyrs who sacrificed their lives for the country, and connected to the people who struggled during the war," says Liu.

The tenor adds that he was thrilled to perform in the gala, which showcased key moments in the history of the CPC and highlighted milestones achieved by the country under the leadership of the Party.

The gala has also been captured and adapted into a movie, which will be screened in September.

Born and raised in Cangzhou, Hebei province, Liu was a die-hard fan of rock music as a teenager. The self-taught guitarist formed his own rock band and performed in local schools. Right before he graduated from high school, Liu decided to pursue musical study and become a professional singer. In 2005, he enrolled to study music at the Hebei Normal University, which enabled him to learn bel canto singing.

"It was a totally foreign art form to me. Thanks to my teachers who recognized my singing talent, I won some campus competitions which encouraged me to learn about, and become interested in, classical music," recalls Liu.

After graduation from the university, the ambitious young tenor left his hometown and tried to get a job as a soloist or a chorus member in Beijing. Despite numerous attempts, his efforts ran aground, and he took a position as the tenor in a private performing art troupe, a role which enabled him to make friends with other like-minded young singers.

In 2008, Liu stood out at an audition for the chorus of the China National Symphony Orchestra, finally realizing his dream by becoming a member of the chorus.

At the same time, with the establishment of the National Center for the Performing Arts, the China NCPA Orchestra was launched to meet the demand of the venue's tight performance schedule, especially for its own operatic productions which involved international artists. Young tenors like Liu were offered opportunities to perform at NCPA opera productions.

As a result, Liu has played roles such as the Emperor in Turandot and Geraldo in Gianni Schicchi, both by composer Giacomo Puccini. In 2013, he performed in the NCPA's opera production of Verdi's Nabucco, which features Placido Domingo in the leading role of Nabucco.

In 2014, the tenor performed the role of Alfred in Die Fledermaus, an operetta composed by Johann Strauss II, during an opera festival held in Macao. Then, Liu was invited to join Lotus TV, a satellite television station from Macao, as both its musical director and as a program host. It was not an easy decision for Liu, who had already built a successful career in Beijing, but he took the job based on the constant progress made in cultural cooperation between Macao and the Chinese mainland since the former colony's return in 1999.

The tenor has represented Macao at many national galas, such as the gala to celebrate the 20th anniversary of Macao's return to China in 2019 and the 40th anniversary of the establishment of the Shenzhen Special Economic Zone last year.