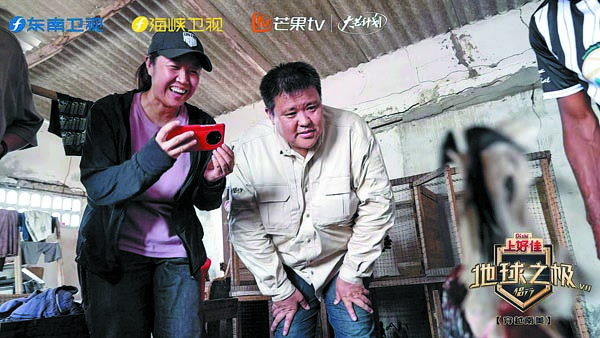 Zhang Xinyu (right) and Liang Hong have visited many exotic destinations in South America, which is recorded in the documentary Top Land. [Photo provided to China Daily]

Following the adventures of a Chinese couple in exotic places in South America, the new season of the documentary Top Land is airing on the video-sharing platform Mango TV.

Zhang Xinyu, 45, and his wife Liang Hong, 43, used to be businesspeople in Beijing, but set off on a round-the-world cruise in 2013.This was recorded in their debut reality show On the Road.

It proved to be a phenomenal success, obtaining a stellar 9 points out of 10 on the review site Douban.

They continued to document their journey around the globe and film their unique travel experience in follow-up shows to On the Road.

As their journey has progressed, they started to feel a stronger sense of responsibility for the well-being of humankind as a whole, Zhang says.

For instance, the Bamiyan Buddhas in Afghanistan had been destroyed by war when they arrived in 2015, so they helped to create digital images that were projected on the remains of the original site at night.

Moreover, they felt the urge to produce a new series to help broaden the horizons of Chinese youngsters. In 2018, the documentary Top Land premiered.

"I hope that the documentary will enable children to see the colorful outside world and that they will understand more about the cultural diversity on our planet," says Zhang. 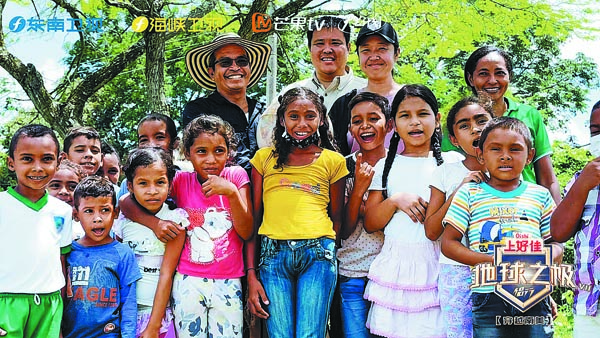 The couple poses with children in Columbia. [Photo provided to China Daily]

In the first episode of the documentary's new season, the couple return to an indigenous tribe living deep in the Amazon rainforest that they had visited previously, to see how the COVID-19 pandemic has affected the life of the population of the tribe, which remains relatively isolated from the outside world.

The couple have been to more than 100 countries and regions and have become renowned global adventurers. They are often offered opportunities to attend international meetings on education, which inspires them to do more for the children growing up in their motherland.

Zhang says they are going to launch an educational base where students can be equipped with outdoor skills that might help them survive in extreme environments, as well as the ability to deal with emergencies, such as a fire.

The show's release on Mango TV is also a move for the platform to enhance its international communication capacity. In March 2018, the platform launched the international version of its mobile app, which offers services in 18 languages to more than 195 countries and regions around the world. Currently, the app has garnered more than 109 million foreign users. Additionally, Mango TV's official channel on YouTube has attracted more than 17.2 million subscribers.

"Art is the universal language. And pop culture is more likely to be spread among the masses than other sorts of culture," says Gong Zhengwen, president of Hunan Broadcasting System, to which Mango TV is affiliated. "And the image of Chinese people, such as Zhang and Liang, can be fully presented to the world through cultural products of varied forms."